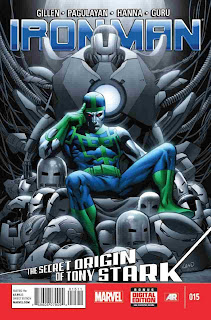 Overall this series has been fairly poor, as although it's had a few good moments, with the last issue being a considerable improvement, it all seems too little too late. There however is still hope in for the series, and if Kieron Gillen can do the same kind of stories he was prior to Marvel NOW!, now he can turn this series around easily.


Iron Man (Tony Stark) is finally rid of 451's control, but now he has to try and stop the Godkiller from destroying the Earth.


This was a brilliant issue, and quite possibly the best issue that the series has seen, let alone the story. This issue showed exactly what kind of comics Kieron Gillen can produce when he wants to, and following the fantastic last issue there may be hope for this series after all. I really enjoyed the energy that Gillen added to this issue, as most of this story has been extremely dull, having a very slow pace. I also loved the excitement in this issue, and how Gillen managed to get extremely creative, showing Tony in his glory with all the tech around him. This issue would also have some emotion to it, as well as plenty of suspense, and drama, and if Gillen keeps this up throughout the remainder of this story I may keep getting it.

The art in this issue was also the best of the series, as although both Greg Land, and Dale Eaglesham have done amazing work, Carlo Pagulayan's art on this issue was out of this world. The detail in Pagulayan's art is simply wonderful, and the fact that he has a slightly similar style to Land helps keep a bit of continuity to the series. I also felt that Pagulayan's layouts were very dynamic, adding a lot of depth to the issue. I also loved how Pagulayan handled Tony's emotions in this issue as it really helped make the story feel more alive, and realistic. The best part of Pagulayan's art however had to be the action, and the suits of armour, which looked phenomenal, adding a lot of excitement.

This issue would see Tony going to what appears to be a mini flight capsule that is his armoury. Now I didn't read this series when he first headed into space, so I don't know if it was shown before, but I felt this was a good addition, though if it wasn't added earlier it's a weird coincidence that he all of a sudden has one. I loved how it interacted the same way as all his tech does, and seeing him change from one suit of armour to another was amazing. I also loved how we got to see his other sets of armour in use throughout the issue as well, and overall the armoury added a lot of excitement to this issue.

This issue would give us what we've been waiting for since the start of the story, Iron Man squaring off against 451. Now it may have taken an awful long time to happen, but it was excellent, and almost worth the wait, with the only problem being just how long it took to happen. The interaction between Tony, and 451 during the fight was also extremely interesting, showing that Gillen is a good writer when he puts his mind to it, as it managed to be exciting, as well as fun without being too much in your face.

The main goal for Tony in this issue would be to save the Earth. Now I'm not going to reveal whether he does this in this issue or not, as although it's rather obvious that he will, whether this issue or a later, I still want to avoid spoilers. Last issue saw Tony very frantic, running around the Godkiller, looking for a way off. It was however much more interesting to see him a bit cooler, and taking everything one step at a time, whilst him still reminding everyone that there is a deadline.


This was an outstanding issue, and easily the best the series has produced so far. It had everything from light humour, to amazing action, being exciting, and dramatic the whole way through. It also had a lot of suspense as well, as well as some interesting dialogue. Individually I'd easily recommend this issue, but as it's part of a story that is already on it's seventh part, with most of the previous parts being poor I'd only really recommend it to anyone that's already been reading it, as otherwise it's better to wait till this story's finished, and hope that the next one starts as this one is now.